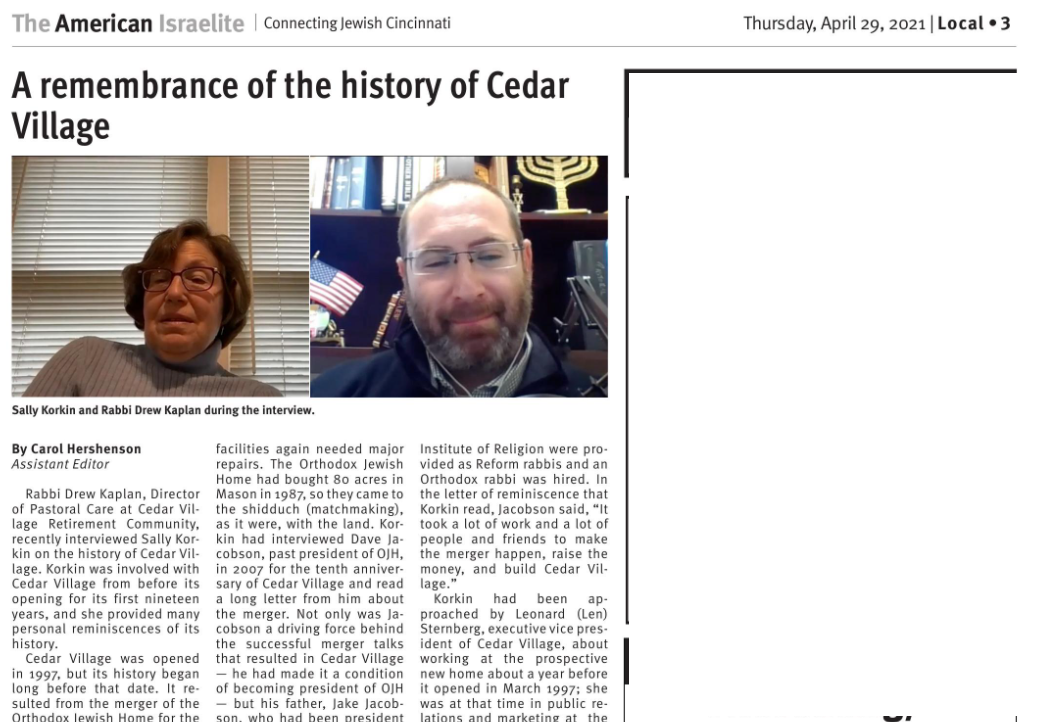 An article in this weekend’s issue of The American Israelite covers a published video conversation between Sally Korkin and yours truly. Korkin had worked at Cedar Village since prior to its doors opening and for most of its operation, so it was a great opportunity to speak with her and discover some really neat facts about the building. That conversation is available here:

It is very neat to see this conversation we had receive local media coverage, appearing on pages 3 and 5 of this weekend’s issue of The American Israelite (and available here). What is interesting is that, instead of running a press release that was submitted to the paper, the paper covered it as a story.

For what it’s worth, here is the draft I had crafted to be submitted (on March 19th), although I don’t know what was ultimately submitted to the paper:

For institutions that have been around for nearly a quarter of a century, there can be a lot of history generated. With this in mind, a recent conversation about Cedar Village’s early history provides viewers with a lot of historical context of the institution and its building.

The conversation features Sally Korkin, who had worked at Cedar Village for 19 years, including even prior to its doors opening in March 1997, in dialogue with Rabbi Drew Kaplan, Cedar Village’s Director of Pastoral Care. Throughout the nearly hour presentation, Korkin provides an organized sense of historical context and intriguing insights into Cedar Village’s history.

Amongst the tidbits that she shares are that the Fountain View apartments had originally been Cedar Village’s memory care unit. Korkin also shares the story behind the series of holiday art that was purchased on the first of three Israel trips that Cedar Village made with residents. She also shares about the opening of the building.

Throughout this conversation, not only does Korkin provide interesting insights, but also provides a pride of place to both residents and staff, as well as residents’ families who may choose to view the presentation. The presentation made its debut to residents on the in-house broadcasting channel at Cedar Village on Friday, March 19th, along with encore presentations on Saturday, March 20th and Sunday, March 21st in the building. It will receive encore presentations in the future. It is also available for public viewing on YouTube.

(And, yes, it did, indeed, debut that weekend for the residents.)

What’s amusing to me is that, it seems that the policy of The American Israelite is not to promote or otherwise write anything about online material, so they likely assigned someone to write about the video (without mentioning that it’s a video). In any event, I am grateful that they provided coverage and shared some of Cedar Village’s history to the community.

Unfortunately, as Korkin pointed out to me, there are some errors in the article covering the video, including (but not limited to):

Errors aside, I am glad that this history of Cedar Village shared by Korkin is getting attention and can be preserved 🙂

2021-04-30
Previous Post: Sharing Resources from My Chaplaincy Position
Next Post: Video Essays on the Fourth Chapter of Pirkei Avot