Considering Elders’ Ages in the Thought of Yehudah, son of Tema 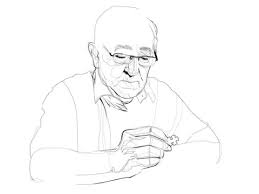 In my current position as a chaplain in a senior living facility, I have returned to a familiar text, about which I hadn’t considered a certain section (Avot 5.24):

While this androcentric text describes various growth stages in a boy’s/man’s life, mostly in increments of decades, typically, I have seen a lot of written attention on the pedagogic aspects of ages 5, 10, 13, and 15 (and even 18), yet there is still quite a lot more to this statement of Yehudah, son of Tema’s. Indeed, while in recent years, I have been quite curious about 20, 30, 40, and 50, I recently have been thinking about ages 60, 70, 80, 90, and 100 due to my current position working as a chaplain with a senior living facility.

When it comes to 60, the phrase זקנה instantly makes me think of זקן – beard; someone reaching 60 sports a beard, but also seems to advertise their wisdom. Certainly, this seems to bridge the ages of 40 and 50 with their discernment and counsel – more intellectual/wisdom aspects with the ages of 70-100 as describing those on the physical [and mental] decline.

Beyond that, Yehudah, son of Tema recognizes that our frail bodies get physically bent by 90 and might as well be dead and done with this world at 100.

Working with the senior crowd, there is certainly something to be said for observing the physical frailties that come with age. However, one thing I have been surprised by is his observation about reaching 100 – until now, I thought it was somewhat humorous, as in “They might as well be dead; they’re no longer of use to society.”

While that may be true, in speaking with one particular centenarian who mentioned that her eyesight is mostly gone and so is a lot of her hearing and that she is largely done with this world(!), it was so fascinating to hear it from her that she is no longer really part of this world and should be gone by now. I had always thought Yehudah, son of Tema, meant that line as somewhat of a joke, yet hearing it from a centenarian was really quite shocking as to how insightful this statement really is.

As I continue working with these residents, I am curious as to how I will continue to gain more insights from this statement of Yehudah, son of Tema.