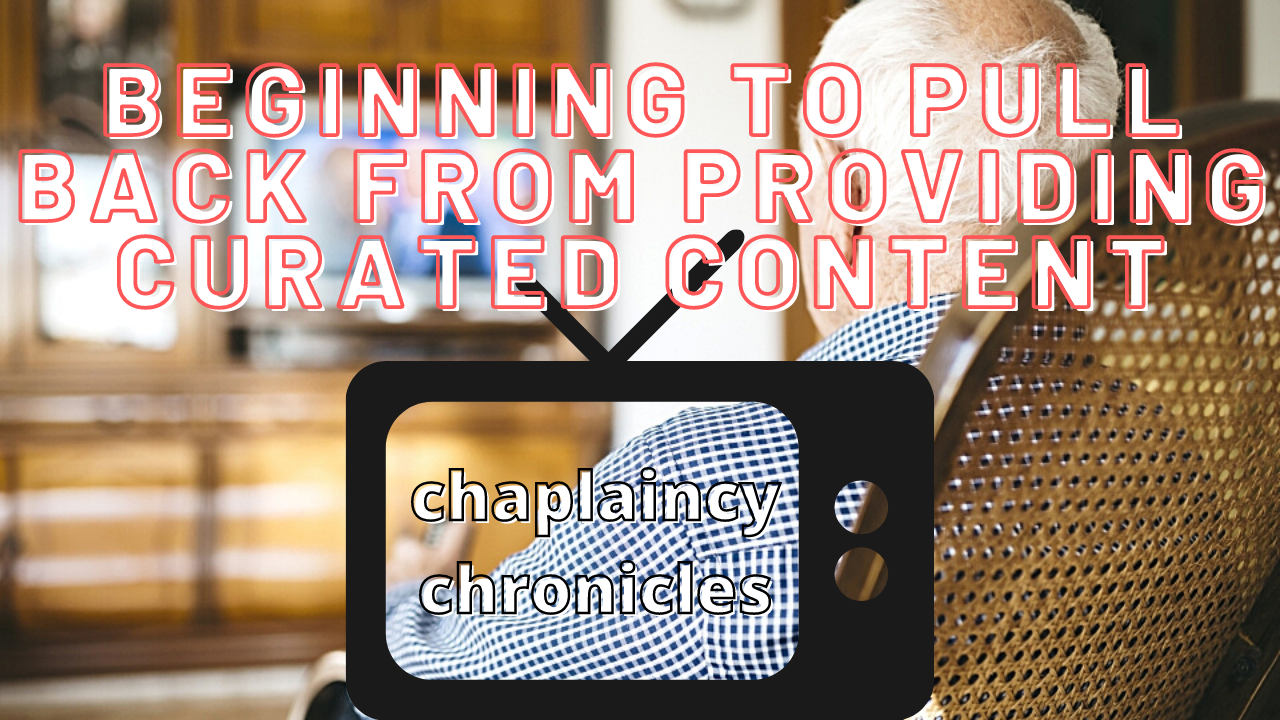 For the past 10 or 11 months – certainly, the majority of the time that I’ve been in my chaplaincy position, which has been during this global pandemic, I have been utilizing the in-house broadcasting channel to get content to residents. I have found and curated video content from YouTube to broadcast to the residents, especially since most of the pandemic thus far – and certainly the summer, fall, and winter – the residents were largely confined to their rooms and really weren’t able to get out, in accordance with Ohio Department of Health guidelines. 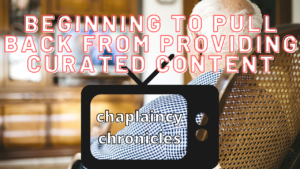 As such, it has been an important service that I provided to my constituents, providing edifying entertainment especially on and around Shabbat, although it also included holidays (Rosh HaShanah, Yom Kippur, and Sukkot were pretty intense). (Yes, as I announced a couple of weeks ago, the archive of this curated content is available here.)

However, now that residents are largely no longer confined to their rooms (at least for the assisted living side of the building; the skilled nursing side is another matter, as the residents have mostly been confined there), I have decided to pull back a little on some of the programming, since the need has lessened (I also have to acknowledge a helpful conversation with a fellow Jewish communal professional that I feel helped provide me with license/encouragement to do so). However, there still remains somewhat of a need, as while the residents have a significantly greater deal of freedom, many still may be in their rooms for some of Shabbat, plus many have become accustomed to the entertainment that I curate and broadcast to them.

Whereas I have at least for the last few months been curating and scheduling programming content on Fridays from around 2pm/3pm through around 9pm, and on Saturdays from 9:30am through the afternoon, often up until around 5pm/6pm. However, I am now pulling back, beginning at 4pm on Friday afternoons and then continuing on until around 9pm, and  on Saturdays, I’ll still continue at 9:30am for the time being and then continue until only about 2pm/3pm. Once we begin holding regular Shabbat morning services, I may begin only starting the content at 11am, then continuing until around 2pm.

So, yes, this is a significant pulling back in this incredibly successful endeavor, but I’m still going to continue to provide the service for the residents in the living facility where I work. When I reflect upon this, I realize that I have probably been leading the way amongst Jewish chaplains in the country. How many others can boast such a lineup of programming for the residents via the in-house broadcasting channel throughout this pandemic? Probably very few and that puts me up – if not at the absolute top, certainly towards the top – of the field in providing this service to the residents. With this deep pride at the success of the work that I have provided to my constituents, I do admit to feeling a certain sense of sadness at stepping away from this success that I have amassed during my first year in this position. Moreover, it has been such a mainstay of my position and the work that I have been providing to the residents, that it seems strange to begin to let go of something with which I have achieved so much success.

Yet, while I am pulling back, beginning with this week’s lineup, providing around 10.5 hours worth of content, as opposed to the 15.5 hours I I have recently been providing, I still remain providing this helpful service to my constituents. I am not cold turkey-quitting this aspect of my job just yet. It will likely be a gradual process of pulling back as we begin to emerge from this pandemic.

2021-05-13
Previous Post: Video Essays on the Fourth Chapter of Pirkei Avot
Next Post: Appearance on The Bridging Connections Podcast