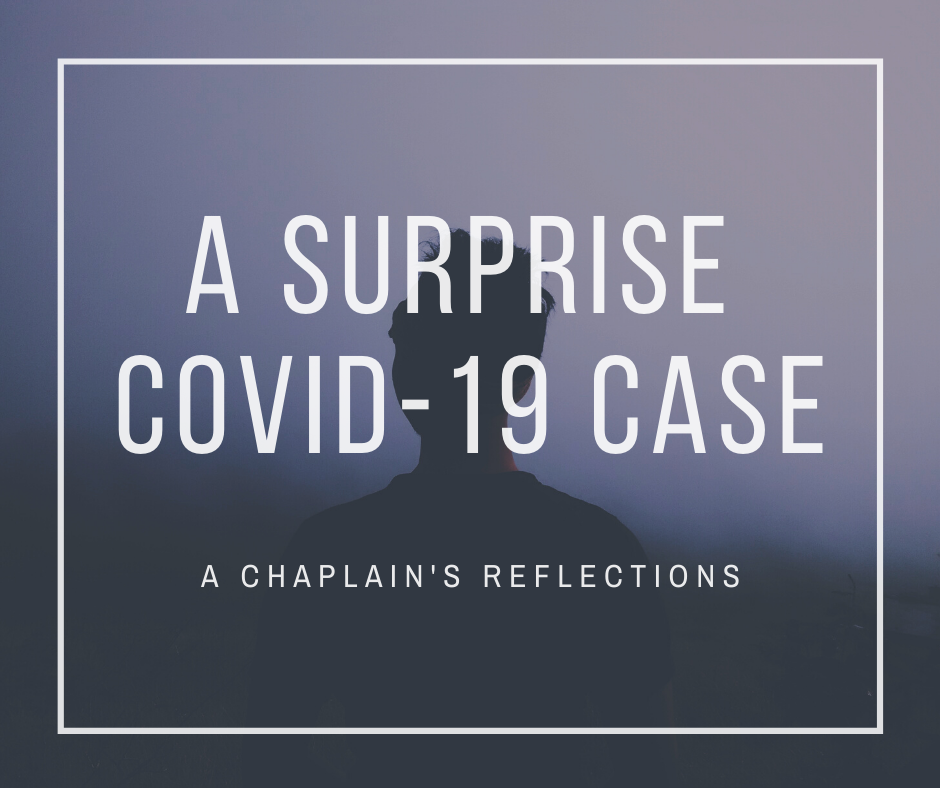 A Resident’s Inspiration
While visiting with one of the residents at the senior living facility at which I work today, he asked me how my job has been, especially starting to work during the lockdown due to the current global pandemic. I said it’s been an interesting time and not without its challenges, but it’s been great to develop one-to-one relationships with the residents. He then responded to me, “You should write an article about this experience.”  Now, I don’t know if I will end up actually writing a full-blown article at some point about serving as a chaplain in a senior living facility during the current global pandemic, but, hopefully, this particular essay will certainly count as one part of the story.

A Ray of Hope
After many months of residents being cooped up inside with limited range of where they could go, they have been quite frustrated with the situation, as they feel like they are prisoners, which is more acutely felt by those living in the assisted living areas, although less so in the skilled nursing areas. A ray of bright hope shone the yesterday when residents received a memo informing them that certain opportunities would be opening up for them:

The Governor has written an order allowing us to start reopening some areas within Health Care and Assisted Living. I was concerned last week with the recent spike in cases and some “talk” in the industry that this order might be rescinded. I wanted to make sure before announcing these changes that they truly were going to go into effect. After 5 months of COVID and the mental and physical stress put on all of us, I did not want to get anyone excited about these changes until I knew they were in place.

The Gray, Grim Surprise
However, only hours after that memo was sent out to residents, residents’ families, and staff, another memo was then sent out to those people, which included the grim news that “We just learned that an Assisted Living Resident tested positive for COVID-19 while at the hospital. At this point, with just learning this information, we cannot determine where the exposure occurred. We will take an aggressive stance to protect all the residents and staff while we manage this situation.” The surprising and sneaky nature of this virus clearly came as a shock, especially considering that this resident was not a particularly social or a wanderer – this resident remained in the resident’s room almost all of the time during the lockdown, so this was a huge shock, to say the least.

That memo continued, “At this point, we will be requiring all Assisted Living residents to self-quarantine in their rooms until further notice. Unfortunately, the Assisted Living outdoor visitation will be suspended again.”

Adverse Effects on Staff and Residents
Between the resident life staff getting excited to have some small group programming (and possibly me getting to lead classes/discussions, as well), and other staff also getting excited about making progress opening up in the building to then having to go back to square one was deflating. And that was just the staff. The residents who lived on the hallway of the person who tested positive for the virus all needed to get tested, themselves, which was neither pleasant, nor fun. On top of that, nurses had to stay longer than the end of their shifts to get these important tests done, which clearly took a toll on them, as well.

In addition to the hallways no longer containing foot traffic of any sort in them and losing their liveliness, there was also an emotional energy that seemed to have been sucked out of them.

Worry and Concern
While there is concern and worry amongst the staff about contracting the virus, as well, the amount of concern that residents have for contracting the virus in the same manner that the resident in question caught it is high, not to mention, the increased protocols to maintain residents’ safety from the virus is also tough for them – it is highly frustrating for them.

Providing a Pastoral Presence
Of course, this is where I come in as the pastoral presence, both as someone who is literally there for them, but also someone there for them to whom they can speak. There is a lot of fear, concern, and more – both of what’s going on inside the building, as well as what is transpiring beyond the walls of the building, including riots and spiking levels of COVID-19. Perhaps in a later post, I will share some common themes that I am hearing from the residents.

2020-07-22
Previous Post: Beginning Chaplaincy Amidst the Covid-19 Lockdown and Its Limitations
Next Post: Using Technology in a Senior Living Facility Under COVID-19 Lockdown