Having mentioned previously that I am commonly asked by chaplain colleagues “Have you done CPE?”, I would be interested to engage in CPE training…when they become available to do so, as long as my current job allows me to do so. One thing I came across that I have found helpful for providing an historical context is Robert Tabak’s article, “The Emergence of Jewish Health-Care Chaplaincy: The Professionalization of Spiritual Care”, which appeared in the American Archives Journal (vol. 62, no. 2), on pages 89–109. 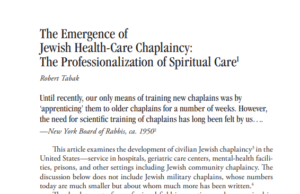 Tabak does an intriguingly good job tracing the history of Jewish health-care chaplaincy, which he contextualizes as there being “a long-term trend toward professionalization in a number of areas that were originally avocational” in Jewish life (89). He mentions that while “most professional Jewish chaplains in the United States are rabbis, a significant number are not, including cantors and professionally-trained Jewish lay people” (90).

One of the curious aspects of chaplaincy in America was that “the makeup of CPE, and its professional group, the ACPE, was changing by the 1980s. Established and led by white Protestant males, the field significantly shifted, as many women, Catholics, African Americans, other minorities, and eventually non-Christians entered CPE programs and some became CPE supervisors” (95). However, in 1990, the National Association of Jewish Chaplains (NAJC) was created in 1990 (98-99), which “represents Jewish chaplains and the Jewish community in health care and other wider audiences. It provides a Jewish organization that is a peer with other North American professional pastoral care groups” (101).

One of the interesting aspects is that, in 2003, NAJC

made the designation of CPE as the only recognized clinical path for becoming a Jewish chaplain. In that year, the NAJC and five other North American pastoral care organizations approved joint outlines for procedures for certification, education, and ethics. At the same time, the NAJC became more specific in the training requirements to become a professional member, a stage prior to certification. In earlier years of Jewish chaplaincy and the NAJC, various formats (often social work, but sometimes another area of psychology or marriage and family therapy) were recognized; but beginning in 2003, new chaplains would need at least two units (total eight hundred hours) of CPE as well as rabbinic or other graduate-level Jewish study, to become full voting members of the NAJC, the initial step for professionals. (99)

Certainly my lack of CPE units is something that is a curious hindrance, yet NAJC (which changed its name in 2014 to now stand for Neshama: Association of Jewish Chaplains, in a move to encompass those Jewish chaplains working outside of the US) does currently offer a general membership which does not require having any CPE units under one’s belt.

I was also fascinated by this historical observation:

Since the 1980s, two wider trends have occurred that have affected the field of Jewish chaplaincy. One is the greater societal emphasis on spirituality as well as on ritual aspects of religious life in health care; the other is that the emphasis on spiritual care is also reflected in regulations by accrediting agencies. (96)

Apparently, owing to this emphasis on spiritual care, hospice programs began to be “required to provide pastoral care” (97), which is incredibly helpful context for me working with residents who are currently under hospice care, as to why they have chaplains attached to them. Of course, I think it’s a wonderful offering.

There is much more to say about this article, but I found it a very helpful historical contextualization of my current professional field.