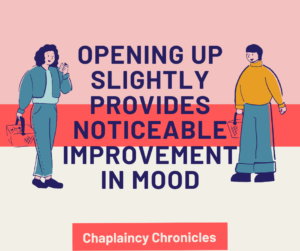 Having mentioned previously about the surprise COVID-19 case we had at the senior living facility where I work, I have some follow-up to the story, which is that there’s good news and there’s bad news. The good news was that the case was confined to just one particular resident, and the bad news is that this particular resident passed away, as a public letter on August 4th from the building’s administrator that was sent out to all residents, staff, and families said, “the resident who tested positive for COVID-19 has passed away at a location outside of” the facility. According to this letter, the administrator continues

What I can tell you is that this resident was sent to the hospital for an unrelated COVID-19 illness. They were not showing any signs or symptoms of COVID-19 at the time of their hospitalization. They were then tested at a later date during their hospital stay. Our contract trace testing that was conducted amongst our other residents and employees came back negative for COVID-19.

Following the discovery about that resident testing positive for COVID-19, all of the residents in that resident’s hallway were tested for COVID-19 and had to stay in their rooms for several days until the results came back. It was really unfortunate to see these residents having to stay in their rooms (or, as one resident called them, “their jail cells”), and they certainly weren’t even permitted to leave their residential wing. Morale had dropped precipitously – not only that there had been a COVID-19 case on their wing, but also that they had been told that visitations, the dining hall, and even the salon would be opening up the following week, but, instead, they had to be shut in their rooms for an unknown number of days and have those openings-up cancelled.

Fortunately, all of the remaining residents tested negative for the virus and in-person happenings were rescheduled.

Finally, last week, the facility was able to open up its assisted living dining room, was able to resume assisted living outdoor visitation with family, as well as for the first time in 5 months opening up healthcare family visitation outdoors, and even including some activities here, albeit with social distancing. This was some welcome good news for the residents.

The other week, I was beginning to feel optimistic, as I knew all these things were about to open up, even though no letters had been sent out to families, staff, nor residents, because the last time a letter was sent out, someone got COVID-19 and hopes for staff, residents, and their families had all been dashed, so no letter was sent out in advance of everything reopening. But, the other week, I was getting quite optimistic for the residents, even though there was still quite a down mood across the building amongst the residents. In conversations with residents, I was trying to impart optimism about things opening up, them getting to see a friends, and, after having 5 months of having meals served in Styrofoam containers alone in their rooms, they would be able to be served in a dining hall and getting to see their friends. Yes, I realize that they would be at least six feet apart, it would be hard to hear, be hard to talk, but at the very least they’re not cooped up in their own rooms.

A week and a half ago, I remember speaking with a resident before everything opened back up and she was quite concerned that we would have another COVID-19 case and have to close everything down again, so she didn’t want to get her hopes up about opening up again. Well, thank God, things went ahead – the dining room opened up last week and it was really exciting to see residents coming out and talking to their fellow residents. After these first two-and-a-half months of working at this facility and seeing the residents mostly in their rooms, it was really great for me to see the mood lighten up, as residents got to see their friends and talk to them, no longer needing to be confined to their rooms any longer. Sure, they need to maintain social distancing and face masks are required, but there is a sense of optimism in the air and a noticeable improvement in mood since I began.

I am looking forward to see how the mood continues to improve.