Featured in the American Israelite’s “Conversations with a Rabbi” Series 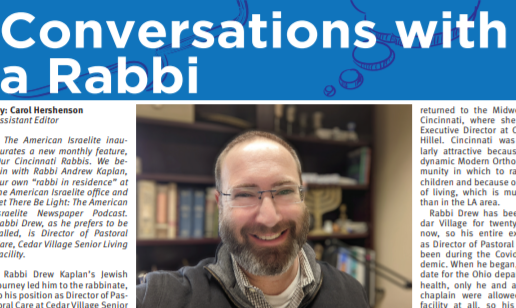 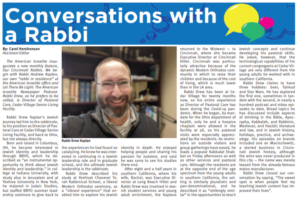 As the American Israelite, Cincinnati’s local Jewish weekly publication, decided to create a new series, “Conversations with a Rabbi”, they decided to pick me as their pioneer.

Written by the editor, the article can be found on page six of the newest issue of the paper. The article summarizes my educational and professional backgrounds, as well as mentioning some of what I do professionally at present, focussing on my current position of Director of Pastoral Care at a senior living facility. There is also a little at the end about my interests, family, and more.

This is my fourth appearance in the American Israelite while working at my current position, with the three previous appearances being

Accompanying this article, I also appeared on the recent episode of the paper’s podcast, the discussion of which also included discussing some of what appeared in this article.

I should point out that the introduction to the article mentions that claims that I am their “‘rabbi in residence’ at the American Israelite office and Let There Be Light: The American Israelite Newspaper Podcast“, which does not mean that I hang out at their offices. The first time I heard them mention them considering me to be their Rabbi-in-residence was when I appeared as their featured guest for one of their episodes in June, It’s certainly flattering to me and I’m glad they appreciate what I bring to the table😀