Thursday marked exactly three months of my having been in my current position as a Director of Pastoral Care at a senior living facility and one thing that has struck me is that dying and death are much different here than it is as portrayed on television and movies. 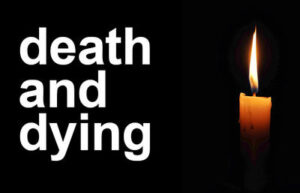 This particularly comes to mind, as a longtime resident breathed her final breath the other night. But her passing was the furthest thing from sudden, as she was not only a centenarien,* but also had been on hospice for over a week, with her octogenarian (octogenarien(?)) daughters having spent all of last week with her and having gotten to say their final goodbyes.

Having a week getting to say one’s goodbyes to one’s parent is something I’ve realized is not uncommon around this place, especially when the person has been placed on hospice. I also recently experienced this with a Holocaust survivor whose daughter said her final goodbye to her and then she was placed on hospice. But then she ended up living another week and a half – she was definitely a fighter.

Whereas it is depicted in television and movies as having a certain sadness around death, especially owing to the shock and suddenness of a loved one’s passing, with an older demographic, it can be far from sudden. To be sure, there is some sadness around the departure from this world for the family, which they mourn, but it is almost more of the finality of it, than necessarily any sense of surprise.

Dying and death can certainly be a long drawn-out process and, as I’ve witnessed, sometimes even family members get impatient with their loved one hanging on for longer than expected. The family members have said their goodbyes multiple times, and then have the opportunity to say them again.

It has been an enlightening first three months, experiencing dying and death, not just for the residents, but also for their family members.

*Yes, I’m aware the spelling for a man who is 100 years or older is centenarian, but the person under discussion was a woman, so just wanted to be genderly correct.